A chimney, simply put, is a vertical tube designed to draw combustion products (smoke and gases) from an appliance like a wood burning stove or fireplace to the atmosphere outside the house. If your house was built before the 1960’s it will have originally been built with chimney breasts in the lounge and dining room which pass through the bedrooms directly above, the loft space and then out through the roof. These were to accommodate fireplaces that were used to heat the rooms at a time before central heating was available.

Chimneys are categorised into ‘classes’.
A Class 1 chimney is common in houses built up until the 1960s. They consist of a brick-built stack situated on either an internal or external wall and containing multiple flues for multiple fires (although the fires cannot share a flue). This type of chimney can be used with all types of solid fuel fires wood burning and multi fuel stoves and gas fires too.

Class 2 (5” diameter) gas flue systems are often found in houses built from the 1960s onwards. They consist of an interlocking metal pipe running through the house, but can be used with certain types of gas fire only. Class 2 (pre-cast) systems consist of a rectangular hollow cavity made from concrete or clay blocks, travelling up the wall cavity to a ridge vent or metal flue terminal on the roof. They can be used with slimline gas fires. 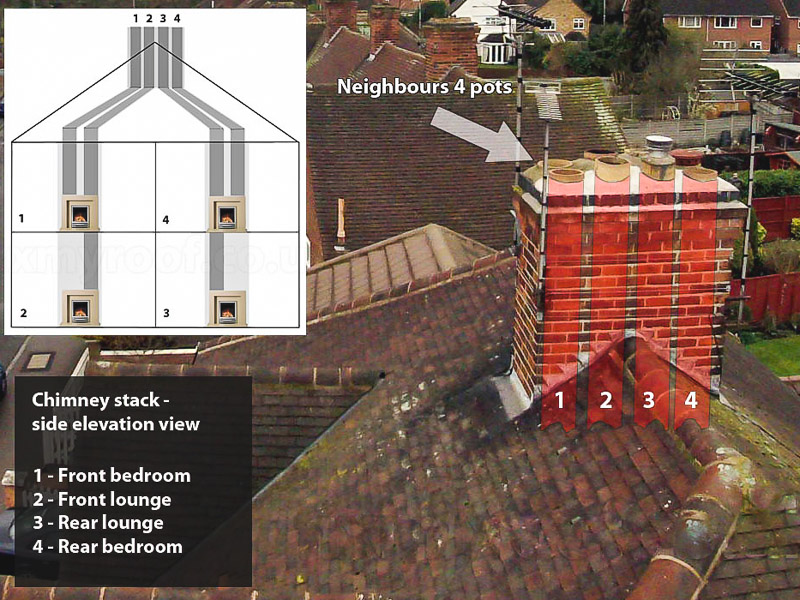 As fires burn they give out combustion gases which are carried out of the home by a flue. Standard brick chimney flues are 9″ squared. Each fireplace will have it’s own separate flue which is divided by the mid feathers. The chimney breast in a lounge will usually house two flues; the lounge fireplace itself and also the bedroom fireplace directly above. If your property has two chimney breasts on the ground floor, this is the same for the dining room; some older properties might have a third flue inside the breast from a fireplace in the cellar below, totalling five chimney pots on the roof.

Each chimney pot on your roof will serve a separate fireplace and its flue. Chimney pots sit in a row on a brick structure called the stack. There are three types of stacks – one when the chimney stack is on the highest point of your roof and every pot for the house is in a row, usually 4 or 5. The other being when a house has two separate smaller stacks half way down the front and back slopes of the roof, usually with 2 chimney pots on each stack. The last type of stack is an external chimney breast which runs up the outside of the property, therefore the fireplace opening is on a flat wall and will not have a breast projecting in to the room.(see images for the different types of stacks)